How to protect pedestrians from moving vehicles

We recently reported on the case of a logistics company that was fined £20,000 after a worker was hit by a reversing fork lift truck and explained why it’s essential to ensure that pedestrians are segregated from moving vehicles.  There have been reports this week of a similar case, but unfortunately in this case the incident resulted in a fatality.

A commercial vehicle company has been ordered to pay costs of £212,500 in fines and costs after a worker was crushed by a lorry travelling at less than 5 km/h.  The driver of the lorry had the front grill of the HGV raised which meant he was unable to see what was immediately in front of him. The court was told that employees would occasionally drive in this unsafe manner around the site.

The company was found guilty under Section 2(1) of the Health and Safety at Work etc Act 1974 which states that “it shall be the duty of every employer to ensure, so far as is reasonably practicable, the health, safety and welfare at work of all his employees.”

Speaking after the hearing the HSE inspector for the case said that the tragic, needless loss of the worker’s life could have been prevented if the company had “properly considered the risks from the movement of heavy goods vehicles at this site, and provided effective segregation of pedestrians from moving vehicles.  Companies that work with vehicles of all sizes need to ensure that all pedestrians are able to circulate and work safely at their premises, at all times.”

According to the HSE there are over 5,000 accidents involving transport in the workplace, with about 50 of these resulting in people being killed.  The main causes of injury are people falling from or being struck or crushed by vehicles.

The most effective way to prevent accidents and to ensure that pedestrians and vehicles can move safely around the workplace is to provide separate routes for pedestrians and vehicles. If this is not possible then clearly marked routes using barriers and signs should be considered.  Where pedestrian and vehicle routes cross, they should be clearly marked using measures such as safety barriers and self closing industrial safety gates to emphasise the fact that they are leaving a protected, safe area and are entering into a hazardous environment so extra care must be taken. 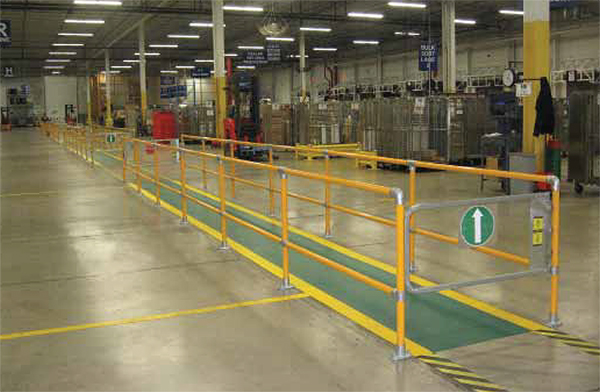 segregation of pedestrians from moving vehicles